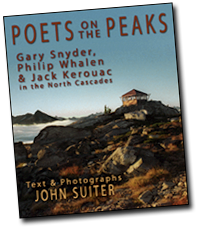 POETS ON THE PEAKS is author John Suiter’s book about poets Gary Snyder, Philip Whalen, and Jack Kerouac during their fire-lookout summers in the North Cascades during the 1950s. Based on scores of previously unpublished letters and journals, plus recent interviews with Snyder and Whalen and many of their friends, Poets on the Peakscreates a group portrait of Kerouac, Snyder, and Whalen that transcends the tired urban cliches of “Beat” life. Poets on the Peaks is about the development of a community of poets, including the famous Six Gallery reading of October 1955, and contains unexpected cameos by fellow poets and mountain-climbers Allen Ginsberg, Kenneth Rexroth, Philip Lamantia, and Michael McClure. Poets on the Peaks is also a book about Dharma and the years of Dharma Bums–from the 1951 roadside revelation in the Nevada desert that led Gary Snyder to drop out of academia and head for Japan, to Kerouac’s lonely vigil with The Diamond Sutra on Desolation Peak, to Philip Whalen’s ordination as a Zen priest. Finally, Poets on the Peaks is the story of the birth of a

wilderness ethic, as well as a photographic homage to the Cascadian landscape, a landscape virtually unchanged since these men journeyed there thanks to the environmental protections they helped inspire.

JOHN SUITER is a writer-photographer living in Chicago since the fall of 2010. He is author of the critically acclaimed Poets on the Peaks: Gary Snyder, Philip Whalen & Jack Kerouac in the North Cascades, published in 2002 by Counterpoint Press. Born and raised in the Philadelphia area, Suiter received his bachelor’s degree, in American Literature and Creative Writing, from Syracuse University in 1973. In the late 1960s and early 70s he traveled around the United States, writing free-lance articles for underground newspapers such as the Berkeley Barb, the Madison Kaleidoscope, the Syracuse Nickel Review, and The Black Panther. From 1981 to 2005 he made his home in Boston, where, in the mid-1980s he returned to school, taking courses in photography at the Art Institute of Boston and the School of the Museum of Fine Arts. Since 1989, he has worked in Boston, Philadelphia, and Chicago as a professional photographer for a combination of commercial, non-profit, and editorial clients. From 1997 to 2006 he taught workshops in Digital Imaging at the New England School of Photography.

In 1989, he published his first extensive photo-essay, for Bostonia magazine, entitled “Kerouacs Lowell,” ten images of locales in present-day Lowell, Massachusetts, that were settings for books by Jack Kerouac. This photo-essay led in turn to Suiter’s receiving a culture grant from the Department of the Interior to create an exhibit of images of Kerouac locales for the Lowell Preservation Commission. In 1993, that exhibit, “Rumors of Kerouac,” was shown at the James McNeil Whistler House in Lowell and the Boott Gallery at Lowell National Historical Park.

In 1994, he was Associate Producer of the award-winning multimedia project, A Jack Kerouac CD-Romnibus. Also that year, six of his Kerouac-related photographs were exhibited at the Washington Square East Gallery in New York City in the group show, “The Birth of the Beat Generation.”

In 1995, Suiter traveled to the North Cascades, where he spent two weeks working as a volunteer fire lookout for the National Park Service at Desolation Peak. From this trip, Suiter produced an exhibit of photographs for the North Cascades National Park Visitors’ Center in Newhalem, Washington. In 1996-97 he published a series of photo-essays and articles on Kerouac and Desolation Peak for The Seattle Times, The Independent (London, England), Sierra, and Shambhala Sun. In 1997 and ’98, Suiter returned to the Cascades for further shooting trips and also met Gary Snyder and Philip Whalen in California. He made portraits of them, taped interviews, and began the extensive correspondence with them which would inform his book, Poets on the Peaks.

In June 2000, he published a lengthy article on the death of the Pop artist Ray Johnson, for The Sunday Review of The Independent in London. Also in 2000, a selection of his Kerouac-related photographs from Lowell, Mexico, and the North Cascades entitled “Jack Kerouac’s America: A Photographer’s Journey,” was exhibited at Salem State College in Salem, Massachusetts, and later in the year at the Amerikahaus gallery in Frankfurt, Germany. He was also invited to teach a seminar on the poetry of Gary Snyder, Philip Whalen, and Jack Kerouac in the American Studies Department of Goethe University in Frankfurt. In December 2000 he returned to California for further interviews with Snyder, Michael McClure, Philip Lamantia, and Joanne Kyger. Poets on the Peaks was completed in January 2002. Throughout this period and to the present he has continued to do free-lance assignment work for commercial and editorial clients. He is presently at work on a biography of Gary Snyder.